Dancing in the Museum/Volitional experiences of viewing: thoughts inspired by artists, museums, Carrie Noland, and Jacques Rancière | By Kate Mattingly 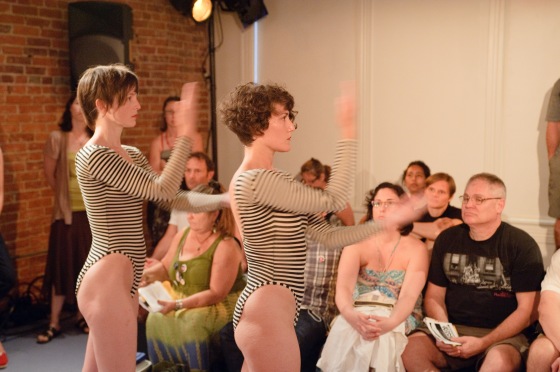 The Berkeley events organized by the Arts Research Center and described by Emily Hite and Julie Potter in their June 2012 In Dance article triggered a bunch of questions. I was there, as a moderator, and recently reminded of some of the crucial ideas introduced during the panel when I read these sentences by Hite and Potter:  “Has there been such a thing as museum dance?” versus dance placed in a museum. Instead of an answer to fill the silence that followed, another question surfaced: “What shock, tremor or displacement of force does dance communicate to a museum?”

Rather than exploring performances that have been placed in museums, I’ve been thinking about experiences of movement in museums. I’m interested in how these encounters generate insights and interruptions. I am drawing on theories by Noland (Agency and Embodiment) and starting with two ideas: first, through our bodies we explore and examine sensation, and second, through change or displacement we become aware of what we hold onto, how we encounter difference, and how we consider the unknown. In other words, kinesthetic experiences place pressure on social conditioning and leave traces physically and kinesthetically. Noland writes:

…gestural routines of inscription yield kinesthetic experience that is a resource in its own right, a resource of sensation capable of subverting the institutions of inscription by promising new, unmarked material to record. In short my wager is that the interoception provided by movement can be productive of new cultural meanings.[1]

Moving through shows by Tino Sehgal at the Guggenheim (“This Progress,” 2010) and Marina Abramovic at the MoMA (“The Artist is Present,” 2010) brought to the forefront codes and expectations, perhaps explicitly at the Guggenheim when entering the museum I encountered an irate woman screaming at the admissions desk: “This is not art.” Walking along the circular ramps, encountering Sehgal’s interpreters, I gained a different perspective on the design of the museum and diversity of voices within it. Guided ambulation redefined architectural and historical spaces, triggering mental and physical shifts. Boris Charmatz used a similar framework in his “Musée de la Danse: Expo Zéro” at Performa 11. In the New York Times Claudia La Rocco described the work as “a reimagining of the museum: what the space might allow for and what it might hold if populated not by objects but by people.” I was not there for the event but read about visitors engaging with dance history through conversations with artists like Valda Setterfild and choreographic exercises by Charmatz (pictured above).

Jacques Rancière describes particular moments of encounter in his lecture “The Emancipated Spectator” delivered in 2004: “What has to be put to test by our performances – whether teaching or acting, speaking, writing, making art, etc. — is not the capacity of aggregation of a collective but the capacity of the anonymous, the capacity that makes anybody equal to everybody. This capacity works through an unpredictable and irreducible play of associations and dissociations. Associating and dissociating instead of being the privileged medium that conveys knowledge or energy that makes people active – this could be the principle of an ‘emancipation of the spectator,’ which means the emancipation of any of us as a spectator.”

Rancière’s lecture delivered in 2004 inspires thoughts about dancers in museums more than three decades earlier. In Trisha Brown’s “Walking on the Wall” (1971), seven performers, dressed in simple outfits of pants and shirts, wore harnesses with ropes clearly visible and attached to the ceiling. This apparatus allowed the dancers to walk sideways on the walls of the Whitney, heads facing the center of the room. This piece shifted the placement of dance from the floor to the wall, from a theater to a gallery, from the display of shapes to a radical shift in orientation and kinesthesia. The dancers’ slow to moderately paced steps kept their bodies parallel to the floor. Sometimes they moved backwards. Never looking down, they moved without music. The performance did not present a narrative, but suggested kinetic sculpture. When two people crossed paths, even bumping into one another, they treated the encounter like a conversation, a meeting between two people on a sidewalk. Arriving at a corner, a tricky transition was negotiated: a delicate jump shifted the dancer to the next wall. When she was working on ‘Walking on the Wall’ and other pieces that involved equipment and architecture Brown said she was interested in “ordinary activities under extraordinary circumstances.”[2]

When dance scholar Deborah Jowitt saw the piece she remembered how “the effect was very peculiar, because you felt as if you were in a tower looking down at the tops of the heads of these people walking across a white plaza. That was the way it looked but it did not feel that way, because your own center of gravity”[3] was still oriented to the room’s floor. Commonalities could be drawn between this piece and a description by Benjamin Buchloh of Robert Morris’s sculpture and the ways it elicits “a phenomenological loop of bodily movement and perceptual reflection.”[4] Using Michael Fried’s argument about minimalist sculpture and the way it created a “special complicity” with the viewer, it’s possible to see how Brown’s work resonates with Morris’s interventions. In Brown’s creation, the object, the performance negotiated a particular encounter, thereby extending the propositions of Morris’s sculptures. The experience of viewing the work was an essential part of its creation and interpretation. Deborah Jowitt adds: “The dislocation between what you saw and what you felt was very odd.”[5]

Displacement. Perhaps this is the pivot point for volitional experiences. Although questions about the cache and validity granted artists who enter into the visual arts market are important, my specific interests in museums and galleries pick up on ways in which these spaces become platforms for performances that highlight viewers’ experiences, the leveling of doer and watcher.

In the same lecture Rancière states: “Spectatorship is not a passivity that must be turned into activity. It is our normal situation. We learn and teach, we act and know as spectators who link what they see with what they have seen and told, done and dreamed. There is no privileged medium, just as there is no privileged starting point. Everywhere there are starting points and turning points from which we learn new things, if we first dismiss the presupposition of distance, second the distribution of the roles, and third the borders between the territories.”

Two of the events I encountered this year activated — kinesthetically as well as visually — what Rancière describes as a “play of associations and dissociations.” In San Francisco when Macklin Kowal presented “Yours and Mine” at Meridian Gallery he offered a performative response to work of Irish painter Patrick Graham that was dispersed through the three floors of gallery space, generating a collage of tempos and textures through movement and stillness, with audience members making their own choices about where to linger. In Washington, DC when Kelly Bond and Melissa Krodman presented “Colony,” part of the Capital Fringe Festival, they reconfigured their audience through a sequence of repetitive actions that not only invited us to move closer and farther away, but also made visible qualities of being that both linked and separated viewer and dancer, art and performance, seeing and discovery.

Kate Mattingly is a doctoral student in Performance Studies at the University of California, Berkeley and a visiting professor at George Washington University. She holds an MFA in Dance from New York University and a BA in Architecture History and Theory from Princeton University, and has been published as a dance critic in The New York Times, The Village Voice, Dance magazine, and The Washington Post among other publications.