Dancing in the Museum | In Dance, By Emily Hite and Julie Potter 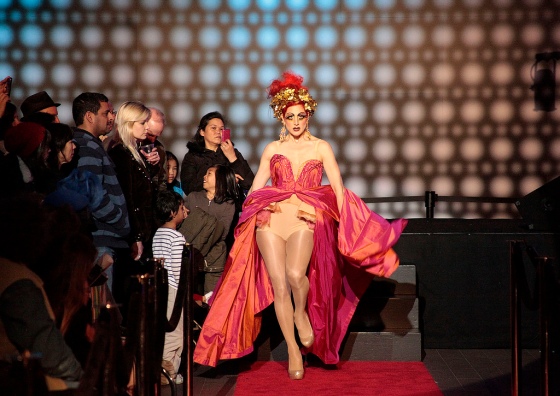 WHEN YOU LOOK at a white-walled cube or empty courtyard, do you see a performance space? If you knew the history of every hundred- or thousand-year-old painting, sculpture, and anthropological record in a museum, would you envision bodies in motion, following their own energetic impulses and trajectories, among them? This September, Dance Discourse Project #13, co-produced by Dancers’ Group and CounterPULSE, will address dance in museums in a program at the de Young Museum. Through artistic and curatorial lenses, expert panelists from the visual arts and dance realms will join us in discussing the following:

With more public programs and performances taking place within museum and gallery walls, what are the current priorities for presenting dance in this architecture? How can movement function in a space designed for another kind of art and a different mode of looking? How are museums and galleries selecting dance to activate their spaces, and how does dance change when its context comes artistically charged with a particular point of view? How does dance placed in visual arts environments support the trend of the museum as a public gathering place?

We aren’t the first ones to be talking about what happens when performance crosses into visual arts territory (think back to John Cage in the 1950s, or to Futurist performance in the early twentieth century, or perhaps further). But neither is the case closed on what to make of it.

In fact, “Dancing in the museum isn’t new, but…” could have comprised a subsection of the Making Time symposium presented by UC Berkeley’s Arts Research Center this April. Discussions over the weekend questioned how dance is produced and received on museum premises. We’ll be attending related events and reflecting on selected texts as we consider the topics for September’s Dance Discourse Project.

Making Time gathered curators and scholars from across the country at the Berkeley Art Museum. One of the panels, Dancing in the Museum, involved  speakers Jonah Bokaer, Judy Hussie-Taylor and Mark Franko (with response by Ralph Lemon, the panel was moderated by Kate Mattingly) discussing the implications of performance at visual arts institutions. The discussion provided a platform for leaders in contemporary dance and scholarship to address, one voice at a time, the slippery slope of mixing mediums and crossing borders.

Throughout much of the conversation, panelists considered how Western concert dance could be shaped differently for a museum than for a proscenium stage. Franko, professor of dance and chair of the theater arts department at UC Santa Cruz, asked, “Has there been such a thing as museum dance?”–versus dance placed in a museum. Instead of an answer to fill the silence that followed, another question surfaced: “What shock, tremor or displacement of force does dance communicate to a museum?” Franko’s assigning dance as a powerful, perhaps menacing, force acting upon a solid structure met prepared responses.

Bokaer, a choreographer, media artist, and dancer, described his collaborative work with visual artist Daniel Arsham. One of their efforts, Replica, which premiered in 2009, features a fractured white cube—a structure acted upon by dance, much the way Franko described. Some of the dance, performed Bokaer and Judith Sánchez Ruíz, moves through the cube, which has been punctured onstage by Ashram. Bokaer noted that performing Replica in open, public spaces disrupted the dance and the reception of the  sculpture in unintended ways. For instance, during a performance outside of one museum, audience members took liberties to move out of the intended viewing space, thus configuring their own points of view onto the sculpture and dancing. Hussie-Taylor, executive director of Danspace Project, remarked, “Conscious displacement of a work of art, live or otherwise, brings the opportunity to challenge perception,” allowing a viewer truly to see differently.

“Where the work is encountered informs how it is framed and ultimately processed,” Hussie-Taylor said. Trisha Brown’s Man Walking Down the Side of a Building, which premiered in 1970 in and around 80 Wooster Street in New York City, puts on meanings and discards others in a 2008 performance outside the Walker Art Center in Minneapolis. Hussie-Taylor showed footage of the more recent performance to encourage listeners to consider how differently an audience might respond to the same work in different contexts.

Expectations also seed divergent reactions to dance in a museum as experienced by a dance audience versus a visual arts one. Dance viewers are more accustomed to watching a work beginning to end, whereas visual arts patrons more commonly assume autonomy during their museum experience. Hussie-Taylor pointed to this phenomenon as evidenced by an interview with Sarah Michelson by Trajal Herrel this year in Movement Research Performance Journal 40. There, the choreographer recalls the reception of her work at the Whitney Museum, noting that dance and visual arts audiences demonstrated different levels of endurance in their attention.

In receiving art, whether an action in a museum or an object, can we consider why the work was made and how it functions? “To curate time-based work is to query the viewer’s expectations and assumptions about place–where they are–and time–how long they expect to be there,” Hussie-Taylor said. “To present dance out of place is to take into account the viewer’s expectations and then upend them. This is the most challenging and the most exciting aspect of dance in museums, at least in my mind,” she added.

In developing this discourse for DDP #13, we will look at dance in some of its possible places and at art that moves. We’ll look at performance that disrupts space and spatial configurations that disrupt performance. Additionally, we’ll consider actions as art objects that can be collected and presented as visual art, and the body as archive. As we refine talking points of the panel discussion, we’ll explore previous instances of dance presented in the museum, audience reactions to it, and where both might be heading.

Save the date: Dance Discourse Project #13 takes place at the de Young Museum on Saturday, September 15, from 2-4pm. This event is hosted in conjunction with Monique Jenkinson’s 2012 Artist Fellowship at the de Young.

Visit ArtPerformanceNow.wordpress.com for further reading, consideration and response to the topic by DDP #13 organizers Emily Hite and Julie Potter. We’ll be posting about other provocative dances and articles, writing our own commentary, and inviting guest bloggers to contribute to the conversation.

This article was originally published in the June 2012 issue of In Dance, a monthly magazine published by Dancers’ Group, serving the San Francisco Bay Area and beyond. dancersgroup.org